How to fix a marriage by rejecting these two lies 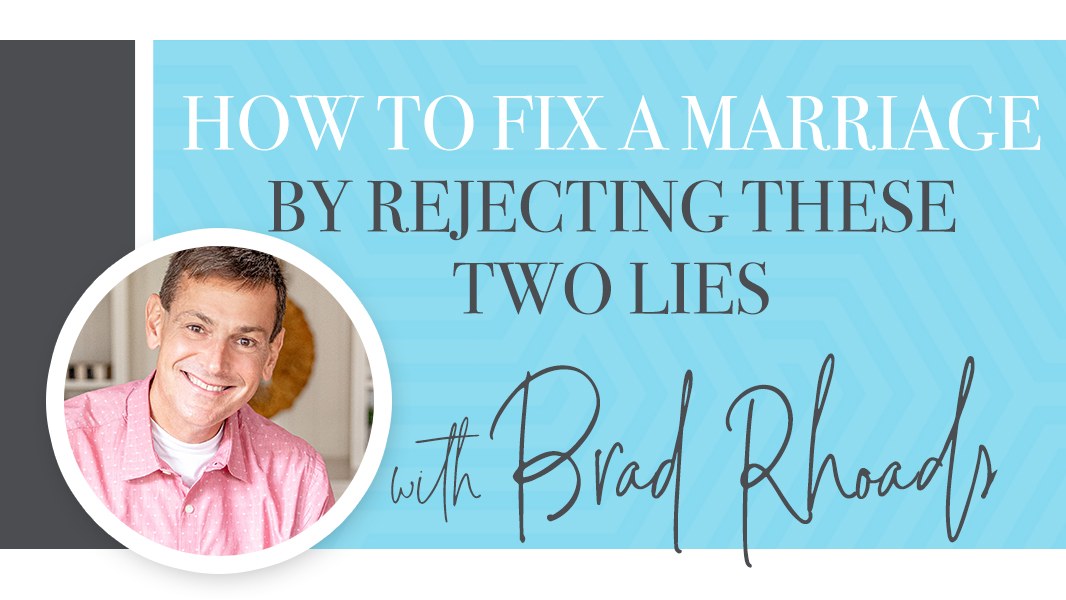 John and Susan met through an online dating service. The techno-virtual matchmakers of the day ran the algorithms and determined they’d be perfect for each other. While online matches don’t always work, this one did. They started chatting online. Then, they set up their first in-person date.

They thought: Will we be attracted to each other in person? Will conversation be as rich when we are face to face? Are there habits or baggage that are deal-breakers? Well, none of the fears came true and they fell deeply in love.

After a year of dating, they got married. Their lives seemed better than ever. John was confident and full of energy. Susan was no longer lonely and had a renewed excitement about life. They were so dominated by being in love that their previous problems barely even hit the doppler.

Then, life started taking over.

They started talking less and spending less time together. The relational dopamine high wore off and reality set in. After a year of marriage, the raging fire of emotion turned into a smoldering pile of struggles and to-do lists.

Susan felt lonely and unattractive. John felt disrespected and like his wife didn’t even like him. Susan thought: “Do I still love him? Did I make a mistake and marry the wrong person? If our marriage was right, I wouldn’t feel this way.” John felt Susan was overreacting, but acknowledged marriage wasn’t what they had expected.

First, they didn’t do the things in marriage they did in dating, like date, talk, prioritize, and be creative. But there is more to it than that. They expected marriage to deliver in ways that were not intended or possible.

John and Susan thought marriage was the answer to their problems.

John thought marriage would make him feel respected, would satisfy him sexually, and be a source of confidence. They fell into the trap of believing they would “complete each other” and life together would be so much easier than it had been when they were single.

We often ask of marriage what only Christ can give. Satisfaction, confidence, peace, and significance come from Christ and Christ alone. They don’t come from your spouse or your marriage.

Back to Susan and John.

Susan had an encounter with Jesus and the absolute sufficiency of Christ was revealed to her. She saw her beauty, joy, and security could only come from Jesus and not John. Susan gained a real confidence that freed her up to love her husband.

Their marriage was set free by the only source of true freedom—Jesus Christ. So, marriage wasn’t working for Susan because she was asking from it what only Christ could give. Then, her marriage was fixed by her fixing her eyes on Jesus.

Many of us expect of marriage what it cannot deliver. Then, when it doesn’t deliver, we blame our marriage and are tempted to leave it. Even then, many repeat the process. But the dopamine high wears off again and the second marriage can’t fix the person’s problems any better than the first could.

What do we learn from John and Susan’s example?

Our hope is in Christ and Christ alone. We can and should radically pursue Jesus and acknowledge His sufficiency. Then, we turn to our most important horizontal relationship in life and lay down our lives for our spouse.

When we do that, we really find life. As it says in Matthew 10:39, “Whoever finds his life will lose it, and whoever loses his life for my sake will find it.” Simply said, we find life by giving it away.

God didn’t design us to be parasitic where we draw from another person to make us feel good about ourselves. Instead, we are designed to be filled with the love of Jesus and offer it to others—including our spouse.

It is time to reject two cultural lies that are trying to destroy the family.

The second lie: Marriage should be your consistent and ongoing source of happiness, and if it isn’t delivering, you should get out of it.

So, let us hold marriage in high regard. Let us lay down our lives for our spouses and be covenant keepers. Let’s show the world that marriage is VERY important, but our hope is in Jesus.

Brad Rhoads is Co-Founder of Grace Marriage and this article is part of a monthly column Brad writes for the Messenger-Inquirer Newspaper.