Marriage and divorce: a 13-year-old's perspective 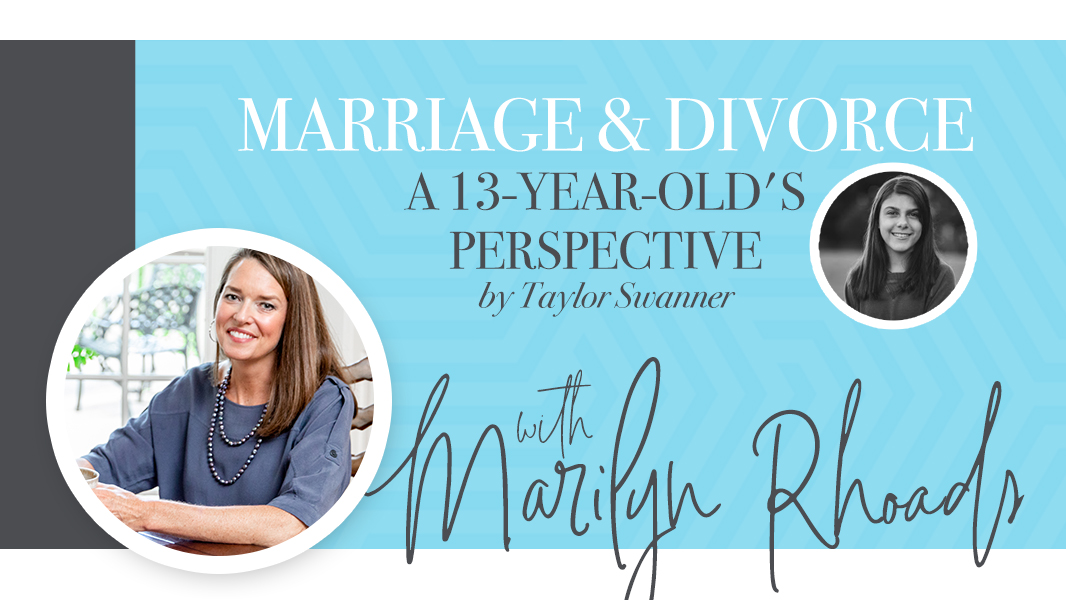 We received an article from a 13 year old expressing her perspective of marriage and divorce. It's enlightening to read this from her view. I want to share it with you here. I pray her perspective encourages you to love each other well and prioritize your marriage.

Here is Taylor's article: So far in my 13 years of life, my parents have loved each other and made time for their marriage. As a kid, I would beg my parents not to go when they would go on their dates. I didn’t know their time spent together built up their marriage. I didn’t understand how it would later influence me.

I felt safe and secure.

Mom, Dad, marriage, cool. I didn’t know much — I just knew they had fun together and kissed a lot. I find the kissing nasty, but them having fun makes our home feel light-hearted and happy.

They are a team. If mom said “no,” I would then ask dad. This didn’t work because they supported one another. It was like Superman and Batman minus the hating each other. They knew each other’s weaknesses. They were a team, stronger together.

I feel safe and secure when they are firm in the marriage. They are my heroes and I guess my four siblings and I are Gotham city. Their job is to keep us safe. They set an example of how I should be as an adult, as a wife in the future.

But, not all marriages are this wonderful. There are so many broken marriages. Marriage is a big deal. If marriage doesn’t go well, it feels tense and kind of dark. It becomes a real tangle of problems and a mess to look at.

I don't personally know about divorce, but...

I can’t say from experience how divorce impacts kids. But I know many friends who have parents who were near divorce or have been divorced. I’ve seen how awful divorce with kids can be or how bad constant fighting can be.

It makes children think, “Am I enough? What did I do wrong? How can I fix this?” Even though they didn’t do anything wrong, so many kids are aching for acceptance and love that parents can give.

But when they think they can never be enough, they go wherever they can to feel even a little accepted. And that is a dangerous and dark place to go if Jesus is not your sole satisfaction.

When marriage is broken.

A broken marriage puts such a negative spin on marriage. Kids don’t have the role models they need. They don’t have someone to help set boundaries. Marriage isn’t beautiful to them. It’s twisted, broken, and scarred. They don’t understand how people can stand each other in a forever marriage kind of way. It’s so much easier to go from one person to the next, escaping responsibility.

On my parent’s anniversary, I stated that my parents had been married for 15 years. I wasn’t bragging or being sassy. I was simply sharing a special day with my friends. That’s when one of my friends asked me, ”How can somebody be together for 15 years?” And that got me thinking.

How did married people stand each other that long? Basically, my thoughts were, “If marriage is anything like middle school crushes, we’re all in trouble.” It was an interesting thing to think about.

My parents don’t fight often, but when they do, it’s not like we don’t know what’s going on. Even small kids pick up on those negative emotions. All this is to say, we know. It is tense. It is sad. It is confusing. Kid’s pick up on Mom and Dad’s emotions easily.

So, from my perspective, I know marriage is not easy. It is made to be a beautiful thing that God uses to glorify Himself. It is important to prioritize marriage to make kids feel safe and to provide a good example.

Imagine if your city placed a priority on marriage.

Can you imagine what your city would be like if all the marriages were healthy and set a good example? If the marriages brought glory to God and impacted not just these families in your city, but places all over the world.

Now, that is a place where I would love to live. A beautiful world where broken marriages were not a huge problem. A world where kids begged their parents to stay home when they go on dates. A world where there are more Superman's and Batman's to watch over their cities. It would be a safe, secure and happy place for kids all over.

Work as a team.

So, work together as a team. Go on dates — even if your kids complain. Be careful what you say. Be nice to one another. Our lives as kids will be much better if you do.

Marilyn Rhoads is the co-founder of Grace Marriage. This was originally written by Taylor Swanner who is 13 years old. Her post was originally titled Marriage and Gotham City — a 13-year-old's perspective.